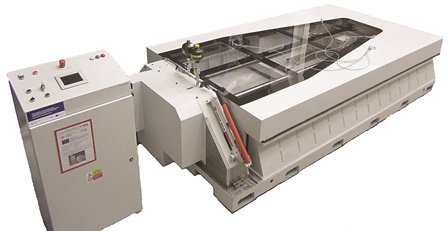 Special testing device for company Kulickove srouby Kurim was developed and manufactured by company "Vyzkumne centrum pro strojirenskou vyrobni techniku a technologii" (Research Center of Manufacturing Technology – RCMT), which is a part of Faculty of machines CVUT in Prague (Czech Republic). The Center offers development and manufacturing of devices.

Other functions of Foxtrot are reading information from converter and from sensors (required for life cycle tests – pressure/force, temperature, vibration), monitoring of errors and limitation statuses. If the test is running without problems (lenght in weeks or months), Foxtrot „only“ loggs data of life cycle test to SD card. In case of error or reaching the limitation the test is interrupted and the e-mail to be sent to maintenance staff. Measured data can be downloaded and used via net interface.

Programming was done in sotware Mosaic in ST programming language. Testing device is in operation since August 2013.

User interface is created via Webserver in Foxtrot, programmed by Webmaker tool in Mosaic software. Locally the operation is monitored at touch panel ID-28 in control cabinet.

For maintenance access the PLC is registered to TecoRoute service and that´s why it´s possible to use remote access to the whole technology.

Detailed information we can read in the Czech language in magazine MM Prumyslove spektrum here.